Many times you hear the word science and technology together. What is the connection between the two? Do you know? Study of science includes a method of observing things around us, thinking about why those events happen, recording information about the events, explaining why the events happen and also predicting what might happen. Often, scientists imagine what might be the solution and what might be the answer to the puzzles around us. The understanding of phenomena can lead to the development of tools – this is what we call technology. Technology can provide us more methods of observing, experimenting and recording. And this in turn results in the advancement of science. Thus, science and technology share a symbiotic relationship.

Can you think of examples of where technology has helped the growth of science? One area is that of cell biology. Until the microscope was invented by Robert Hooke and Anthony Leeuwenhoek, the study of cells was not possible. Now we study structure of cells, growth of cells, disease-affected cells, cell reproduction, gene sequencing and DNA using many advanced microscopes and cameras; the data and images are analysed using computers.

As you can see the microscope started with simple magnification; now,the images captured by the microscope and camera can be input into the computer for further study and research. It has even become possible to scan parts of the body for diagnosing illnesses. Many complex problems in biology are being studied through the use of computers. Some of these areas include study of how certain diseases, such as cancer develop, and the development of medicines.

Similarly, our understanding of astronomy has been expanded after the invention of the telescope. But to make a telescope or microscope, we need to understand the properties of light. We must understand how a lens works, how light travels. Thus, science and technology are very closely connected.

Your teacher will discuss with you more examples of how technology has impacted the way we understand many natural phenomena.

Information is not new for human beings; communication has been known since the time human beings lived in caves. Thus ICT are as old as human beings themselves; human beings needed to communicate with one another, beginning with symbolic (non verbal) ways, before language was invented. The language we speak could be seen as first 'ICT', it enabled (oral) communication among human beings. Writing (script) was the next technological advancement, around 5,200 years ago, which enabled information could be created and communicated across time and place, which is not possible in the case of oral communication. Writing also enabled easier recording of human history and thus the invention of script was a landmark in the history of ICTs. Next came printing which made it possible replicate writing on a large scale. The invention of radio and television (called 'mass media') was the next advancement in ICT as it became possible to share information with more and more people. Thus, the technology for information creation and communication has been changing. We are now in the middle of the transformation in ICT, through the introduction of digital technologies. 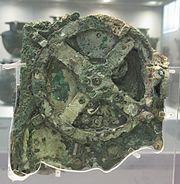 Impact on computing and development of computers

Can you guess what these two images are? The one on the left is called the Abacus which was used to perform calculations with numbers by moving the beads. The one on the right is called the Antikythera machine which was used in Greece to calculate the positions of astronomical objects. Over the years, computational technologies and devices continued to develop, some for general calculations like the slide rule or Napier's calculating tables and some for specific applications like predicting tides.

Many such analog devices were used for performing different calculation tasks like the ones shown below:

All of these are examples of analog devices that could perform calculations, in other words, these are analog computers.

Can you look at each of these pictures and think what might be the process by which analog computers work? Write down what they measured, how they may have measured, and how they gave results.

During the mechanical and electric analog phases of technology, information was created by a series of physical changes converted into electrical impulses for storing and machine, and each analog information storage required a specialized equipment to decode and read the information. A cassette player or a gramophone disc is an example of such a device. Analog machines could be programmed for specific applications as well as for general computing. Since information was being represented physically, results were not always accurate as they could not be replicated exactly.Such a device is called an analog computer.

Development of a programmable computer

While analog machines continued to perform calculations and operate machines, people were beginning to work on computing and how to develop a machine that could perform general purpose calculations.

The first programmable computer was invented by Charles Babbage, that could perform a series of calculations, in 1833. Input was through punched cards and output was through a plotter and bell. This was a big achievement in the history of development of computers.

Development of the digital computer

We saw earlier how analog machines worked and what were the difficulties. With the discovery of electricity and circuits, it became possible to represent things using electric signals. Using a series of circuits and electrical signals, it became possible to perform calculations, bringing in the electro-mechanical analog computers.

When Alan Turing developed a theory that a computer can be programmed to solve any problem, that can be defined mathematically, the development of modern computers began. The use of Boolean algebra helped developing logical circuits for electrical signals and launched the digital revolution. Boolean logic uses the binary system where information is represented as a series of "0"s and "1"s thus allowing information to be accessed through only a combination of these two digits. This allowed information to be communicated in discrete bits which could be combined and recombined. Such a computer which uses "0"s and "1"s to perform computations is a digital computer.

This improved the reliability and ease of computations significantly over the analog machines and led to the growth of computers as we know it - from large clunky computers to the computer on your desktop to the laptop and now the smart phone. What makes our society now different from ever before is the presence of these digital technologies.

Watch the timeline of computer history

What is the word that comes to your mind when you say communication? The phone, precisely the cell phone. We will now look at how the communication technologies evolved.

The earliest electronic communication devices functioned using radio technology. Many communication devices we know today also function through radio waves. Radio waves are electromagnetic waves. Radio waves carry a certain amount of energy and can travel over large distances. When the wave reaches the destination, the receiver gets the amount of information. We cannot see radio waves but we can detect them by building receivers that can detect them. These are called antennae. They scan the environment for radio signals and respond when they find a signal.

You must be thinking if this is similar to how we hear sound. Sound is a pressure wave – when we produce a sound it travels by disturbing the air particles. If there is no medium, sound cannot travel. What happens when we hear something on a radio? Originally sound is produced and then it converted into radio waves. These waves are sent and received through instruments called antennae. When your radio antennae receives this radio wave, this is converted back into sound and is played.

Before the cell phone came, most of the long distance voice communication was through the regular telephone. This was based on the idea of travelling sound waves. They cause the mouthpiece to vibrate and this vibration is carried to the receiver at the other end. When a call came from one number, there would be an operator who sat at an office and connected the call to another receiving number. Now this is different with automatic switches which connect the calls. The transmission of the signals has also become different now with voice being converted into electrical signals. All these transmissions used to happen through physical cables. These cables were either made of copper or optical fibres.

When you make a phone call, the voice signals from your phone get transmitted through these cables to the nearest telephone exchange and through a series of switches sent to the receiver. Usually the first few numbers in our telephone number indicates the exchange information. In the earlier days, long distance calls (outside of the local exchange) could only be made by booking a trunk call. The users had to 'book' or rent the line through which the call can be made and this used to be done manually by the telephone operators in the exchange. Now-a-days, with automatic switches, long distance calls can be made directly to any number, even outside the country.

The telephone and the radio came together - And we call that the cell phone! We saw how a telephone works. We also saw what radio waves are and we have some idea of what frequencies mean. There are many frequencies available for the users to talk on. Any geographic area is divided into small plots, and in each area a fixed number of frequencies is used. Each of these areas are called cells. The cell phone is named as such because it functions by dividing a geographical area into small plots or cells through which the transmission takes place. It is possible to make and receive calls when there is a cell phone tower near your area for receiving and sending that frequency. Now do you understand what we mean when we say 'my cell phone has no coverage here'? It is because of this also that cell phones sometimes do not work inside buildings when the radio signals are disturbed. Just like an exchange for regular telephone calls, there is a mobile switching that allows you to make calls even when you move from one cell to another!

Can you make a list of all the things a cell phone does?

OER in other languages

Did not find what you are looking for?